The Philippines spreads through a vast oceanic region of more than 7,000 islands, while geographically located in South East Asia, it is miles apart in terms of tourism compared to Thailand and Vietnam. It is made up of thousands of islands which means that there is no obvious travel route and the possibilities are endless. The Philippines encaptures the very best of adventures from beaches and island hopping, to scuba diving, wildlife and amazing landscapes.

Most domestic flights around the Philippines run from Manila. A number of friends and myself flew into Manila from Sydney, all nationalities are awarded a 30 day visa on arrival. We spent one night in what I can only call ‘the slums’,it reminded me quite a lot of Bangkok, busy, loud and full of natives. Manila being the capital of the Philippines is a densely populated bayside city, the centre of transportation and business. Instead of tuk tuks their main mode of transport is tricycles and jeepneys. We didn’t venture too far into the city as our flight to Puerto Princesa was early the next morning. 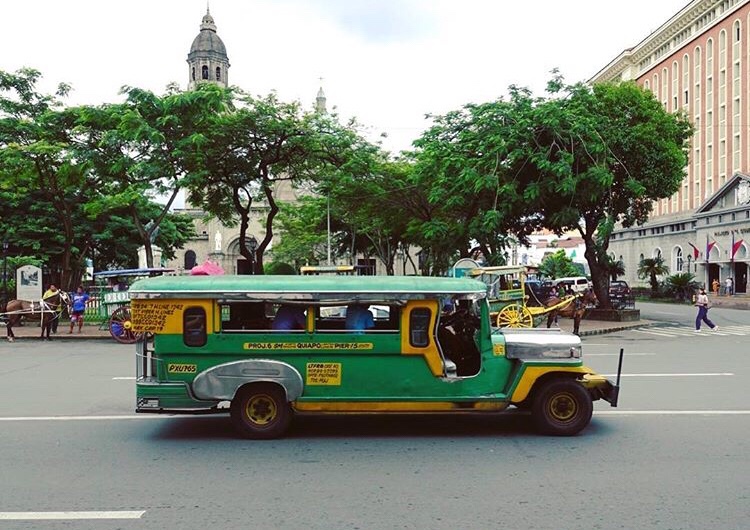 After a very early rise dripping in sweat due to humidity we caught a flight from Manila to Puerto Princesa (a teeny tiny airport) and from there we got a small shuttle bus to El Nido, a 5 hour bumpy ride. There are two airports in Palawan: Puerto Princesa and El Nido with flights into Puerto Princesa generally being the cheaper option, but it means you’ve got to endure the long bus journey to reach El Nido. If you are not on a tight backpacker budget I’d recommend looking into flights direct to El Nido, it will save you a lot of time and a long uncomfortable journey, especially if you are prone to car sickness.

El Nido, a municipality on Palawan island is known for its white sandy beaches, coral reefs, and is used as a gateway to more islands. This is a primary base for exploring Palawans star attractions. We finally arrived at our destination – Outpost hostel, a fun, social, backpacker hub located on sunset beach. ATMs and wifi are a commodity, get your money out early as local ATMs tend to run out of money. We were reunited with girls who had already been in the Philippines a few days, three absolute party animals on their return home from Australia. The girls were staying in the popular ‘Melting pot’ hostel right in the centre of town, a stone throw away from Pucca bar, a reggae, busy, shake yo booty spot full of backpackers alike.

The main thing to do in El Nido is to explore the Archipelago on a selection of boat trips. All hostels and travel agents in the town sell 4 tours named tour A,B,C and D, very inventive names. The tour packages are all priced the same so no need to shop around. I’d definitely recommend tour A and C, both were incredible. Corong Corong beach was home to wonderful sunsets and sunrises – Sunset beach. Each tour carried out was travelled on a traditional Filipino boat called a bangka. Our first destination was helicopter island, named because of its shape resembling that of a helicopter. The water was ultra clear with endless sightings of coral snakes, tropical fish and even squid. Secret beach – mantiloc island, towering grey karts cliffs surrounded us as we stood in a pocket white beach. It’s a place of paradise concealed by the cliffs and only accessible through a narrow crevice in which you had to swim through to access. The tour guides were an absolute hoot and provided a huge feed for us at Talisay beach, fresh fish, fruit and salads. We had a great group on our tour, great banter altogether. We met two lovely girls from the UK, Steff and Sian who we kept bumping into in other destinations on our trip. I also met Raquel, a colleague of mine while working in the theatre department in London, what a small world.

Armed with goggles, flippers, a snorkel and a life jacket we all set off for Star beach another spectacular snorkelling site featuring the wonders and beauty of the reefs, star fish, and sea urchins. Our final stop, hidden beach was surrounded by limestone rock formations, the swimming area resembling a natural infinity pool with crystal clear blue waters. We were glad of the life jackets to keep us all afloat, a few sore heads from the night before, – with a tactical chunder here or there. Las Cabanas beach is another popular spot, quiet, unspoilt and truly beautiful. The superman zip line comes highly recommended and can be done from this beach to a nearby island and back completed with an ice cold drink while watching the sunset. 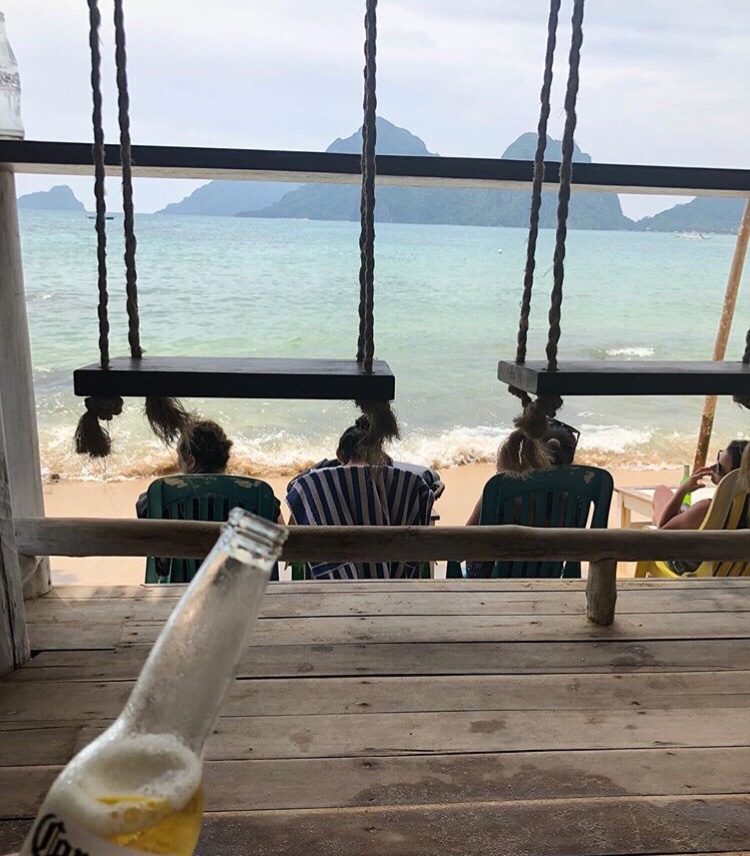 A few of the girls fell victim to uneasy tummies and took to the bed for the day, bad drink, an awful thing! Caitriona and I organised a bus from El Nido to Nacpan beach to meet the others for the day. The twin beaches of Nacpan and Calitang are included in the itinerary of almost everyone heading to this part of Palawan. A 4 kilometre strip of powdery white sand, a touch of paradise just north of El Nido. The best way to get there is by shuttle bus or tricycle at 1000 pesos each way. The road to the beach is not yet fully developed, after a few kilometres of paved roads you hit good auld dirt roads so pack your sea legs and magnetic wristbands, it’s a bouncy ride. The first impression of Nacpan beach was outstanding, miles and miles of sand parallel to a bright blue ocean. There were relatively few tourists and rows of palm trees providing lots of shade, it was simply beautiful.

The following day was full on with hours of travel, starting with the shuttle bus to the airport. We flew from Puerto Princesa to Manila and Manila to Boracay, where we met the full group of 17 people. Yes 17! Everyone was genuine, outgoing and friendly, and most importantly all keen for a good session. We got a ferry boat from Caticlan to Boracay port, the jetty port provides bangka pump boats that ferry between Caticlan mainland and Boracay island from 5 in the morning until 9 at night (tickets can be purchased at the airport or outside the jetty before entering). The trip from the mainland to the island was a short 20 minute journey, the porters gladly helped manouver heavy luggage in return for a generous tip, ‘tip ma’am’.

Boracay, a small island in the central Philippines is known for its insanely beautiful resorts and beaches. Along the west coast, white beach is backed by tall palm trees and copious amounts of restaurants and bars. On the east coast strong winds make bulabog beach a lovely hub for water sports, while the observation deck on mount luho offers panoramic views over the island. At only seven kilometres tall and it’s bikini line 500 metres wide, tiny Boracay is the Philippines most popular tourist spot fuelled by an electric atmosphere and a truly friendly vibe. The centre of the action is dreamy white beach, a four kilometre long picture perfect strand lined from one end to the other with hotels, restaurants, bars and dive shops several blocks deep. The ocean full of romantic paraws (outrigger sailboats) with colourful parasails giving large groups of package tourists ( mainly from Korea, Taiwan and China) a sunset sail. After perfect sunsets theres live music break outs with fire dancers and dancing chefs who we joined on occasion, the party goes on all night. The island has so much more to offer than just sun and sandy beaches, the Boracay nightlife is bursting at the seems with young enthuastiastic backpackers living the dream.

Honestly speaking Boracay was truly amazing, good people, tanning, mingling, lapping up the sea breeze and taking in all it had to offer. We stayed in mad monkey hostel which was enormous, the best party hostel with a great bar, friendly staff and cheap accomodation close to the beach. It turned out to be an extremely social place and  a great way to meet other travellers. The choices were endless for entertainment – pool party, booze cruise or a chilled out BBQ night.

Mad monkey encouraged pre drinks at the hostel bar most nights with free shots on the hour every hour. At 11pm scooters would line up at the entrance to escort all the party goers to the strip for a night on the town. ‘Epic’ beach club and ‘exit’ nightclub were the hotspots along the strand. Mad monkey provided a booze cruise taking us to many beautiful islands and the evening was spent cliff diving. I tell you one thing, it was a hell of a long way down, Ooh the pain after flailing off the 20 foot cliff at around ten million miles per hour bum first.

While in Boracay we did eat at many great restaurants, one being the hobbit house in which the waiters were actual hobbits/dwarfs, it was unreal. We chickened out of getting a photo with them in fear of being rude, however, Steff and Sian got one. Another lovely eatery was the spider web hotel which overlooked clear, glistening waters, it was like eating in a treehouse.

Next on the agenda was Puerto Princesa to visit the caves in the underground river. We flew from Boracay to Puerto Princesa with Cebu pacific. We booked all our internal flights with Cebu pacific, a budget airline. This airline was great value for money, in total we took 5 flights, none of which were delayed. In order to get to the caves we had a two hour transfer and a boat ride which was definitely worth while.The underground river is one of the worlds wonders of nature, absolutely amazing. We travelled by raft through the massive cave, the longest underground river in the world. There were hundreds of bats roaming freely (be careful to close your mouth when looking up at them or you may end up with a surprise), giant monitor lizards, sea snakes and water spiders were everywhere to be seen. It was a very cool experience.

Beautiful beaches, adrenaline pumping activities, cheap beer, good food and the most genuinly friendly people in all of Asia, the Philippines did not disappoint. With thousands of islands to explore you could spend a lifetime in the Phillipines and not see it all. Session depression hit hard when we made it to Manila and had to go our seperate ways to Sydney, London and Dublin. My liver and bank account were well and truly in need of some loving care but it was worth it all.